2016 has been a year of new opportunities. Since the foundation of EDIN in June 2016, our network has grown to:

We thank all our partners for the trust 2016 in EDIN.

We are happy to announce that Suki.international is joining Edin effective December 2016.

Suki made their decision after Edin Kick-off Summit and the meeting on the EUROBAUSTOFF Forum 2016. As a young, versatile and dynamic company, Suki focuses on private and professional customers with dedicated strategy for each. Suki and Edin partnership strongly focuses on the networking and new technology.

Thank you Suki, we are looking forward to a hands on cooperation!

We are happy to announce that Metabo joined Edin in November 2016.

Metabo is a dynamic and innovative company believing that Edin concept and network offers a competitive edge on the market. After all, Metabo offers products from professionals for professionals while Edin targets professionals and brings the together.

We are looking forward to a great cooperation and will pull ahead with the power of Metabo drill.

We would like to thank EUROBAUSTOFF for an invitation to yet another great Fair that took place on the 6th and 7th November 2016.

The Forum was a great opportunity for Edin to follow up on the development from Kick-off Summit, see friendly faces again, but most importantly to engage further in the networking activities.

Every event is a great chance for networking and this year’s Forum only proved it. 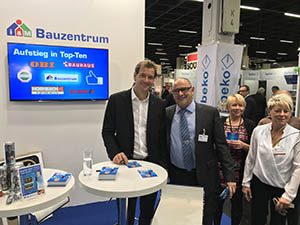 In early fall of 2016, EDIN S.A. has hosted its very first event, the Kick-off Summit.

We were proud to welcome our 20 Key Decision Influencers (KDI) from industry and trade along with the network of EDIN consultants. The purpose of the event was to introduce the new European building materials and DIY network and to strengthen the bonds between our suppliers and distributors.

The agenda of the Summit contained:

The three-day event set an important milestone for EDIN and together with the participants, set a challenging goals for the future.

We are looking forward to see you on the EUROBAUSTOFF Forum in Cologne, Germany!

Thank you a lot,

We are pleased to announce that EUROBAUSTOFF joined Edin effective August 2016.

EUROBAUSTOFF puts at Edin network’s disposal their 13,6 billion Euro sales in more than 1528 outlets. Moreover EUROBAUSTOFF engages their top IT people to participate in Edin Think Tank and the IT development projects.

We are looking forward to a great cooperation with the strongest and most dynamic German specialist dealer!

It is a great honor for us to announce that Fischer, the dowel company, joins Edin as a very first member.

Fischer is a young and dynamic company focused on organic growth through quality, partnerships and technology. Therefore we believe that Edin is a perfect match for Fischer, because our strategy is to expand business through broad dedicated network and support the position with modern advanced technologies.

Thank you Fischer for your trust and support. We are looking forward to a cooperation strong as Fischer dowel!